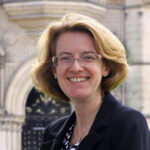 Cllr Susan Hinchcliffe is the Leader of Bradford Council as of May 2016. She was originally elected as Councillor for Windhill & Wrose in 2011.

In 2012 she became Executive member for Employment, Skills and Culture across the Bradford District, overseeing the largest local authority jobs programme in the country – Get Bradford Working. In June 2015 she also assumed political responsibility for Education in Bradford. Outside politics Susan has had her own business, worked in a Marketing agency and spent five years in a management role at a national newspaper. Until being elected as Council Leader she had been working for Business in the Community, a national charity which promotes responsible business practice. Here she managed the Healthy High Streets regeneration programme, a national programme operating in 67 towns across the UK.