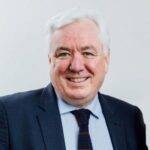 David Docherty is Chief Executive of the National Centre for Universities and Business, and Chairman of the Digital Television Group, the industry body for digital television in the UK.  He was the first BBC Director of New Media and Deputy Managing Director of BBC Television.  He led cable company Telewest’s (now Virgin’s) drive into broadband content and services as MD Broadband, and has been Chief Executive of two television and interactive media companies.  In the public sector, he was Chair of Governors of the University of Bedfordshire, and a member of various government advisory panels on new media, technology, and higher education. He serves on the Research Excellence Framework Panel and the Strategically Important and Vulnerable Subjects Committees for the Higher Education Funding Council of England (HEFCE) as well as HEFCE’s Enterprise and Skills Committee. He is on the Engineering and Physical Sciences Research Council (EPSRC’s) Digital Economy Panel, the Arts and Humanities Research Council (AHRC’s) Creative Economy Board and the Technology Strategy Board (TSB’s) Interim Advisory Board for the Digital Economy Catapult.