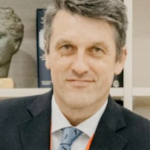 Kevin Andrews is the Federal Vice-Chancellor of Unicaf University, an independent, pan-African higher education institution. He is the founding academic of Unicaf which was established in 2012 and has grown to a global enrollment in excess of 40,000 students from 156 countries. He received his PhD in Archaeometry from the University of Sheffield having begun his research at Masters level at the University of Bradford. He is interested in the use of 4:0 technologies in making higher education more accessible through online solutions.Kevin relocated to Cyprus from 2005 and became involved in institution building, working as a consultant within the liberalization of the independent tertiary education sector that led to the establishment of the island’s first independent Universities. Between 2009 and 2016 he was the Director of Quality Assurance and Curriculum Development and from 2012 Chief Academic Officer at the University of Nicosia Online division which developed into Unicaf. He is a member of the Association of University Administrators, a member of the University Leaders for Sustainable Future and signatory of the Talloires declaration, and the United Nations SDG Accord, a Fellow of the Society of Antiquaries of London and also a Fellow of the Higher Education Academy. Kevin is a member of the Global Perspectives Strategic Advisory Group of Advance HE in the UK.