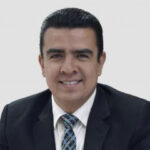 Dr. Luis Alberto Gutierrez Diaz de Leon obtained his Ph.D. with honors in 2008, in Computing Science from the Autonomous University of Aguascalientes.

He is currently Chief Information Officer of the University of Guadalajara, where he has undertaken various projects, such as strengthening and increasing the infrastructure and services that provide connectivity to the institution, including more than 300 university spots in 108 municipalities in the state. He is chairman of the Development Committee of the Network of the University Corporation for Internet Development (CUDI), where he has coordinated projects of national importance, such as the growth of the fiber network to interconnect more than 30 universities, all of them members of CUDI through the NIBA network, increasing the scope of the National Network of Education and Research. Among other award-wining projects that he has received, most notably is his appointment as one of the “100 Best CIOs of Mexico in 2013 and 2014” by the magazine and CIO / InfoWorld portal. Likewise, he was recognized by Innovation Week Magazine for coordinating projects with “The Most Innovative person of the Public Sector in 2014 and 2015 Award”.