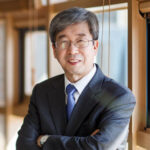 Dr. Seung Hyeon Moon is the President of the Gwangju Institute of Science and Technology (GIST), which is located in the Republic of Korea. GIST was established in 1993 by the Korean government as a graduate-level research institute and GIST

Under President Moon’s tenure, GIST has continued to make remarkable strides in becoming a globally recognized educational and research institution that is focused on developing advanced science and technology as indicated by, among other factors, GIST’s position in the 2016/2017 QS World University Ranking® as No. 2 in the world for citations per faculty.

Having earned his bachelor’s degree and master’s degree in chemical engineering from Seoul National University, President Moon went on to earn his Ph.D. in chemical engineering from the Illinois Institute of Technology. Afterwards, he worked for the Argonne National Laboratory as a postdoctoral appointee and assistant biochemical engineer in their Energy Systems Division from 1991 to 1994. He then joined the faculty of GIST in 1994 and has served in various academic and leadership positions, including Director of the International Environmental Research Center, Dean of Academic and Student Affairs, and Director of the Research Institute for Solar and Sustainable Energies.

President Moon’s professional background and numerous research accomplishments have always been focused on solving the problems confronting humanity, and he is proud to support the vision of the World Technology University Congress.