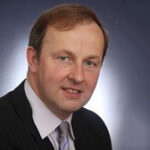 Michael Hannon is the Vice President for Academic Affairs & Registrar at the Galway-Mayo Institute of Technology (GMIT) since September, 2010.

Nationally he is a member of the IOTI governance committee on modularisation. On the European stage he contributed to a EU Benchmarking Project on Higher Education with a particular focus on curriculum reform across eleven countries. He also engaged in the pilot project on u-Map and u-Multirank and as a consequence GMIT was invited to participate in the roll-out of the u-Multirank tool across Europe.

He has widespread quality assurance experience both inside and outside the organisation, externally with the HETAC (now QQI), the Teaching Council of Ireland, the National Council for Curriculum and Assessment (NCCA) and the State Examinations Commission (SEC).

His education philosophy places the student at the centre of the learning experience, a philosophy he enacted throughout his teaching career.

He has published a range of textbooks and is currently pursuing a DBA in Higher Education Management with the University of Bath. The title of his thesis is: “Examining shifts in institutional positioning in the evolving Irish higher education landscape”. This research supports his role on the steering committee of the Connacht Ulster Alliance tasked with bringing a Technological University to the West / North-West region of Ireland.