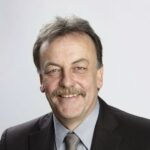 His education at the military academy and his degree in law took him to previous stages in his career to the Austrian ministry for national defence as regular officer and head of studies at the military academy, to consulting companies and building project organizer as manager, CEO or partner and member of the supervisory board. Since 2004 Mr. Reisinger is president of University of Applied Sciences Upper Austria.
Mr. Reisinger is since 2014 member of the IAUP – International Association University Presidents – board, and from July 2017 to July 2021 in the role of acting Secretary General.