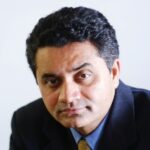 Professor Arun Sharma is the Deputy Vice-Chancellor (Research and Commercialisation) at the Queensland University of Technology (QUT).

He has played a leadership role in development of Australian research capability in information and communication technology. He was co-founder of National ICT Australia Limited (NICTA), and was the inaugural Director of its largest research laboratory. Prior to NICTA, he was the Head of the School of Computer Science and Engineering at the University of New South Wales where he helped establish the Cooperative Research Centre for Smart Internet Technology.