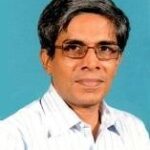 Prof. Bhaskar Ramamurthi Director Indian Institute of Technology Madras Prof. Bhaskar Ramamurthi got his B.Tech in Electronics from IIT Madras in 1980, and his M.S. and Ph.D is Electrical Engineering from the University of California at Santa Barbara, in 1982 and 1985 respectively. After working at AT&T Bell Laboratories for a couple of years, he joined the faculty of IIT Madras, his alma mater, in 1986. He took over as Director, IIT Madras in September 2011. His areas of specialisation are Communications and Signal Processing. His research work is in Wireless Networks, Modulation, Wireless Data, and Audio and Video Compression. He is a founding member of the TeNeT group of IIT Madras, active in developing telecom and networking technologies, and incubating companies to develop and market products based on these. He is currently also honorary Director of the Centre of Excellence in Wireless Technology, a public-private initiative at the IIT-M Research Park to make India a wireless technology leader. He is on the Board of Bharat Electronics Limited. He is a Fellow of the Indian National Academy of Engineering, and of the Institute of Electrical and Electronics Engineers (IEEE). He is also an Honorary Fellow of the International Medical Sciences Academy. He was awarded the Vasvik Award for Electronic Sciences and Technology for the year 2000, the Tamil Nadu Scientist Award for Engineering and Technology for the year 2003, India Semiconductor Association TechnoVisionary Award for the year 2011, Doyens of Madras Award for the year 2014 and ACCS–CDAC Foundation Award for the year 2015.