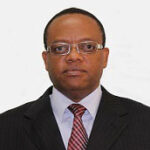 Professor David Alfred Mfinanga is an Associate Professor in Transportation Engineering and is currently the Deputy Vice Chancellor responsible for administration, resources and students affairs at the University of Dar es Salaam in Tanzania as from 5th December 2014.

He graduated with an Honours degrees in (Civil) Engineering in 1991 and obtained his Masters degree from Miyazaki University in 1995 and a PhD degree from Kyushu University in Japan in 1998. He has held various positions at the University of Dar es Salaam and he is still involved in the core academic functions as a normal staff member in the Department of Transportation and Geotechnical Engineering.

Professor Mfinanga is committed to community service including involvement in several boards. He is recognized as a prolific African researcher in transport engineering and has published many papers in international journals. He has recently, together with other international co-authors, published a book titled “Paratransit in African Cities: Operations, Regulation and Reform” published by Earthscan. Professor Mfinanga is fluent in Kiswahili, English and Japanese (conversational).