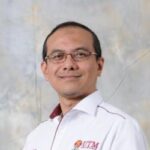 Dr Nordin is the Director for Higher Education Leadership Academy (AKEPT), at the Ministry of Higher Education Malaysia since May 2019 where he is responsible to develop higher education leaders who are competent, agile, with high calibre and values through leadership advancement initiatives for national and international needs. Previously, he was the Pro Vice-Chancellor (International) of Universiti Teknologi Malaysia (UTM) where he was responsible for planning, strategising and executing the internationalisation policies and initiatives as well as global reputation at UTM. Currently, he is a Member of Board of Governor for Tunku Abdul Rahman University College (TARUC), the Vice President for Ge4 Network and a member of the International Advisory Board for Amity University, India. Among other porfolios he previously held were the Advisory Board of Swiss-ASEAN Learning and Teaching (SALT) Network, the Operational Board of the World Technological Universities Network (WTUN), Board Member of APAIE and the Chairman of Executive Committee for Asia Technological University Network (ATU-Net). He is a regular speaker in many national and international forums related to international education and globalisation of higher institutions. He also involved in many strategic talent management initiatives for higher education institutions, including capacity building for young leaders. He has received international recognitions including the Global Academic Excellence Awards 2017 by the Amity University and the World Education Congress Award 2018 (for Eduation Leadership), India.

Nordin graduated with BE (Hons) in Civil Engineering from Salford University (1988), MSc. in Offshore Engineering from Cranfield University (1992) and PhD in Civil and Offshore Engineering from Heriot–Watt University, United Kingdom (1999). He has been with UTM for more than 30 years (since 1988). At UTM, he has performed several senior administrative responsibilities including the Senior Director for UTM International Affairs, Dean of School of Graduate Studies, Elected Senate Member, Deputy Director for the University Marketing Unit. He has served at other positions such as the Manager of International Students Affairs, Deputy Dean and Head of Department at UTM. Currently, he is a Professor in Structural Engineering, and a founding Head of Reliability Engineering & Structural Assessment (RESA) Research Group at the School of Civil Engineering and has published more than 100 papers. In his area of expertise in structural integrity, he is working very closely with oil and gas industry, particularly in pipeline integrity and risk management.