President
University of Shanghai for Science and Technology 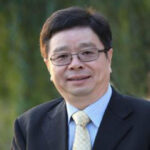 Professor Hu Shougen (born in Sep.1959) is member of Chinese Communist Party and the current President of University of Shanghai for Science and Technology. He is professor, supervisor of PhD, expert enjoying the special government allowance and member of Shanghai municipal political consultative conference (CPPCC).

Participating in work in Sep. 1976, Hu Shougen served as director of rural working group in ji’an county Committee Organization Department of CPC Jiangxi province. From Feb. 1978 to Aug. 1987, he studied at Shanghai Jiao Tong University majoring in Ship and Ocean Engineering and won bachelor and masters and PhD degrees in engineering; From Aug. 1987 to May 2004, he worked at University of Shanghai for Science and Technology and successively acted as vice director of Department of fluid mechanics of University of Shanghai for Science and Technology (formerly Shanghai Institute of Mechanical Engineering), deputy dean and executive vice president in school of energy and power engineering, director of academic affairs office, vice president of USST. From May 2004 to Jan. 2013, he held the post of president of Shanghai Second Polytechnic University.

From Feb. 1991 to Oct. 1992, Hu Shougen was a guest researcher at Mechanical engineering research institute of National Research Council of Canada，Ottawa. In 1994, he was promoted to professor and get doctoral tutor qualification in 1995. He was engaged in teaching and scientific research work in fluid mechanics, fluid machinery and fluid power engineering and made significant contributions in the fields of Ship propeller modification design and calculation, Polymer drag reduction and jet cutting, cavitating water jets, underwater high pressure water jet, and pipeage.