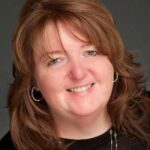 Jacqui is recognised as one of the 100 most powerful UK entrepreneurs. After implementing a banking regulatory change programme with Web 3.0 tools she co-founded FlyingBinary a web science company which changes the world with data, one of the original 250 Tech City companies. She is a high profile mentor in the world’s number one digital hub, Tech City.

Her company FlyingBinary has been recognised with an Internet of things (IoT) international techtrailblazer award. She is personally recognised as one of the 34 IoT Influencers on twitter and one of the 20 global entrepreneurs to watch as part of #GEW2016.

Jacqui collaborated with data-journalism thought leaders to produce her fourth publication, a new PhD primer for journalism using her web science work which connects 34 million citizens across the web. She has articulated the global future of the data journalism industry, she co-founded. As a Visiting Professor at LSBU she is articulating the contribution of the Internet of Things to the New and Convergent Media domains.

Her company has been successfully awarded all nine frameworks under H. M. Government’s industry leading cloud initiative, G-Cloud. FlyingBinary’s latest innovations are underpinning Secured European Cloud Services for Big Data and IoT, which implement GDPR and have no reliance on Privacy Shield arrangements.

She is an expert lead for the British Standards Institute (BSI) team with international colleagues on the top level ISO technical Committee and is the editor for two ISO Smart City standards. As the technical author for the latest British Standards Institute Smart City standard she has articulated the future role of IoT data and services and their value in the domain.