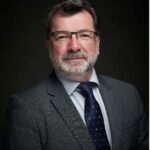 Professor John Ludden CBE John is Bicentennial Research Professor at Heriot-Watt University, following 13 years as Executive Director of the British Geological Survey. Drawing on his extensive experience as an international leader in the Earth and Environment sector, his current role focusses on science governance and diplomacy, with a remit to develop links across disciplines and strengthen communication with the public and policymakers. He has held numerous science leadership posts in the UK, France and Canada in the Earth and Environmental sector with a focus on resource development. He has worked as a professor and research scientist at the French National Research Centre (CNRS) where he was Associate Director for Earth Sciences, at the University of Montreal, Columbia University and MIT/WHOI. Experienced in the academic, government and research sectors he holds a doctorate from the University of Manchester, UK, and numerous visiting and honorary professor posts in UK and European Universities. He is a member of Academia Europaea, Foreign member of the Russian Academy of Sciences, and Past President of the European Geosciences Union and EuroGeosurvey Organisation. In 2016 he was awarded a CBE for Service to Geoscience.