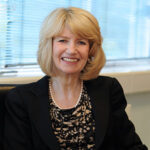 Professor Julia Buckingham read Zoology at the University of Sheffield and, after a short spell in the pharmaceutical industry, moved to London to study for a PhD in Pharmacology at the University of London and to pursue an academic career. She was awarded a DSc and appointed to the Chair of Pharmacology at Charing Cross and Westminster Medical School in 1987 where she became Pre-clinical Dean in 1992. She joined Imperial College London in 1997, contributing to the establishment of the new Faculty of Medicine and held the roles of College Dean for non-clinical Medicine, Head of the Department of Neuroscience and Mental Health, Head of the Centre for Integrative Mammalian Physiology and Pharmacology and Pro-Rector (Education and Academic Affairs). In 2012 she was appointed Vice-Chancellor and President of Brunel University London. Throughout her career Julia has combined research and education with supporting the broader aspects of academic life through work with the research councils, medical charities and learned societies. She has published widely in her field, served on numerous national and international review panels and received a number of prestigious awards and honours for her work. Former roles include President of the British Pharmacological Society, President of the Society for Endocrinology, member of the Sykes Commission, Editor of the Journal of Neuroendocrinology, Chairman of BioScientifca Ltd, Trustee of the Royal Institution and a Governor of St Mary’s Calne. She is currently a Trustee and Member of the Board of the Royal Society of Biology, a Trustee, Treasurer and Member of the Board of Universities UK, a Director of Imperial College Health Partners and of the National Centre for Universities and Business and a member of the All-Party Parliamentary University Group Council.