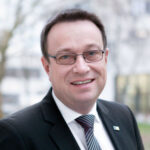 Professor Dr. Klaus Zeppenfeld: Professor Zeppenfeld was born in Werl/Germany. After having passed the Abitur (higher education entrance qualification in Germany), he studied computer sciences with mathematics as a minor subject at the University of Paderborn. Afterwards, he was employed as scientific assistant at Osnabrück University, where he also earned his doctorate. Subsequently working as a senior consultant for Capgemini (formerly: sd&m – software design & management AG), Professor Zeppenfeld was in various projects responsible for the holistic development of individual software solutions for key account customers. In 1997, he accepted the position as a professor of computer sciences at the University of Applied Sciences in Dortmund/Germany, where he was appointed vice dean of the department in 1999, before being dean from 2005 to 2009. In this function, he helped to determine the orientation of the computer science department. In 2009, the Ministry of Science in North Rhine-Westphalia appointed Professor Zeppenfeld as founding president of Hamm-Lippstadt University of Applied Sciences where he stayed until 2021. He is currently at Dortmund University of Applied Sciences and Arts. Besides his activities as a university professor, he also acted as scientific director of IT-Center Dortmund GmbH for eight years starting in 2001. For Brockhaus Software & Consulting AG, he acted as chairman of the supervisory board between 2002 and 2012. To this day, he is a partner in the KonWerl Zentrum GmbH. Professor Zeppenfeld is a board member of various friends’ associations, among them the Academic Societies in Hamm and in Lippstadt. Furthermore, he is the chairman of the partners’ meeting of Kompetenzzentrum-Fahrzeug-Elektronik GmbH in Lippstadt. He as well was a member of an international jury panel for the annual Hamdan Bin Mohammad Award for Smart Government in Dubai from 2014 to 2017. Moreover, he is a member of the advisory board of STARTUP TEENS Netzwerk e.V. and juror in the annual business plan contest for pupils since 2016. He has written several scientific textbooks and has been the editor of the “Informatik im Fokus” book series by Springer Verlag since 2007. Professor Zeppenfeld is married and has two children.