Board of Council
Shibaura Institute of Technology 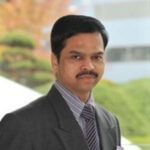 Professor Muralidhar Miryala is Board of Councilor and former Deputy President at Shibaura Institute of Technology (SIT), Operational Board Chair, World Technology University Network and Professor at the Graduate School of Science and Engineering / College of Engineering.

Prof Miryala’s main task is to transform SIT into a high rank university. To accomplish this goal, he has been working and further designed several innovative programs to enhance global initiatives for SIT. For instance, global project based learning (gPBL), advanced project based learning (aPBL), Ph.D innovative program, publication based internship program, high school internship program as these programs are crucial towards global ranking projects.

09:15
Parallel session 2: Diversifying our universities: why it is important and what can we do about it
09:00
International Student Collaboration for Community Involvement
11:30
Operational Board Meeting (Hybrid)
10:50
WTUN in the spotlight: Review of Activities and Impact in 2021-2022 and Our Future Focus
14:00
Parallel Session 2: Engagement with community for global impact
© World Technology Universities Network 2022