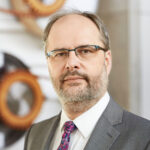 Professor Greene graduated in medicine and also holds a PhD in Pharmacology and an MBA. He was a research fellow at the University of Oxford for six years before being appointed to a Lectureship in Biomedical Science at the University of Sheffield in 1998. In 2001 he became a Senior Lecturer at the University of Bristol and was appointed Chair in Anatomy at University College Cork in 2008. He moved to the University of Bradford in 2010 as Dean of the Faculty of Life Sciences and in 2016 took up his current role as Pro-Vice-Chancellor for Research and Knowledge Exchange at Manchester Metropolitan University. He has held non-executive directorships at the Company of Anatomists and Incanthera Ltd and was elected recently to serve as a Councillor for the North West Region of the CBI.