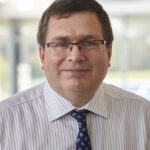 His background is an academic and entrepreneur in mineral engineering, energy storage systems and environmental technologies. He is a graduate of Imperial College (BSc (Eng), PhD) and has held posts at University of Manchester (UMIST),  University of Exeter (Camborne School of Mines), and as Pro Vice-Chancellor at the University of Leeds (2005-2011) and at the University of Birmingham (2011-2015). He has founded several innovation based business including two  PLCs.

He is a Fellow Academician of the Royal Academy of Engineering (UK), the Australian Academy of Technological Sciences and Engineering (Australia) and the Royal Society of Edinburgh. He is an Advisor to the UK Board of Trade. He has worked extensively in establishing new educational and research collaborations in Middle East, Africa, Singapore, Malaysia and China. He is a visiting professor at the Chinese Academy of Sciences (Beijing), Tianjin University of Finance & Economics and at Southeast University (Nanjing). He is an Advisory Board member of the Lloyds Register Foundation, Lloyds Register 100A1 Ambassador, a Non-Executive Board Director of the British Geological Survey, a member of the Converge Challenge Strategic Advisory Board and Chair and a Director of the Scottish Institute for Enterprise.

He is an editor of Minerals Engineering, Particuology and Institution of Chemical Engineering CHERD Journal.