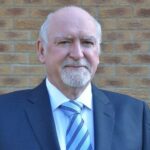 Professor Parkin gained a BSc in Engineering Science from Leicester University and a PhD from Leicester Polytechnic (De Montfort University). He is a leading figure in the international field of Mechatronics and has published in excess of 400 journal and conference papers. In 31 years as a career academic he has graduated 45 PhD students.

He is a Chartered Engineer being a Fellow of the Institution of Mechanical Engineers, the Institution of Engineering & Technology and the Royal Society of Arts & Commerce. The majority of his research has involved industry partnerships and he has served as Managing Director of 3 spin-out companies, winning 2 DTI SMART awards and 2 HEIF Enterprise Fellowships. He has worked at De Montfort and Loughborough Universities served as a non- executive director of the MTC (www.the-mtc.org) before joining Bradford.

Robert is an invited member of the Saxonian Academy of Sciences, Leipzig, Germany and a Visiting Professor of Chongqing UPT and Hohhot Forestry University PRC. He was a founder member of the UK Mechatronics Forum and led the Mechatronics Research Centre at Loughborough University before becoming Dean of the Wolfson School of Mechanical & Manufacturing Engineering in 2007.

During his leadership the School doubled its student applications and trebled its research portfolio. The School’s performance was instrumental in the University being awarded a Queen’s Anniversary Prize for High Value Manufacturing in 2013 and a QS World University 5 stars rating in 2014.