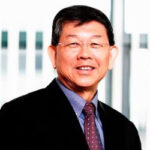 Professor  Sing Kong Lee is the Vice President (Alumni and Advancement) at Nanyang Technological University (NTU). He obtained a 1st Class Honours in Horticultural Science from the University of Canterbury, New Zealand in 1974, supported by the Colombo Plan Scholarship and awarded by the Public Service Commission of Singapore. He received his PhD in 1985 from the National University of Singapore (NUS) in Plant Biotechnology.

After an illustrious career in the civil service, Professor Lee joined National Institute of Education (NIE) in 1991 and was in various positions of leadership. He assumed the directorship of NIE in 2006. Under his stewardship, NIE took a systematic review of teacher education programmes in partnership with MOE and its schools, using the revised National Curriculum as key guides. The resulting 21st-century teacher education model was launched in 2009 to develop teachers with the key values, skills and knowledge necessary to function in the 21st-century classroom.

Building on his extensive knowledge and experience in education, Professor Lee was appointed as the Vice President (Education Strategies) from July 2014 till June 2016 to lead the development of NTU’s strategies and innovations in curricular, teaching methods and assessment. He initiated a framework that provides the support for professors across NTU to proactively adopt Technology Enabled Learning (TEL) initiatives, with the aim of having 50% of the NTU courses to be incorporated with certain TEL components in them by 2020. As the Director of the Centre for Research and Development in Learning (CRADLE@NTU), he leads CRADLE in its focus on research into the best learning practices specific to Singapore’s tertiary education sector. Appointed as the Vice President (Alumni and Advancement) in August 2015, he is pivotal in the re-development of Alumni and Donor relationship in NTU.