Professor of Diversity
University of Bradford 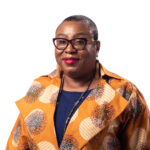 Uduak is Professor of Diversity at the University of Bradford, UK, where she directs the Centre for Inclusion and Diversity and provides strategic oversight for equality, diversity and inclusion across the institution. Recognised by the British Government and the Queen for her services to Higher Education and Equality, she was awarded MBE [Member of the Order of the British Empire] in the 2015 Queen’s New Year’s Honours List. She is a Fellow of the West African College of Nursing and a Fellow of the Royal College of Nursing. Uduak has served as a Visiting Professor at several international universities. She has been recognised as a foremost authority on inclusion and diversity and is currently leading authority in setting agenda to drive research, learning and knowledge exchange activities internationally. She has published extensively on inclusion and diversity. Informed by over 30 years’ experience of working in the health and higher education sectors, her academic and professional work has major impacts locally, nationally and globally. Key among these impacts is that the body of her research work has provided the evidence base for, and a robust understanding of, the development and application of cultural solutions and diversity interventions in public, private and third sector organisations. Uduak is at the forefront of transforming organisational culture for gender and race equality. She has recently led to completion a major multi-million European Commission funded gender equality research project, GENOVATE [Transforming organisational culture for gender equality in research in Higher Education], across 7 European Universities. She is currently leading gender and inclusion elements of a multi-million European Horizon 2020 project, RRING [Responsible Research and Innovation Networked Globally], along with 22 international partners in Europe, China, Africa, India, Japan, North America and South America. Her research on ‘Disrupting the disproportional disciplinary proceedings’ of Black and Minority Ethnic [BME] staff in the UK National Health Service [NHS], and ‘Cracking the concrete ceiling’ for the advancement of UK BME Academic staff have made a major contribution to shaping the agenda on race equality, and informed global debates on systemic racism and other forms of structural inequality.

10:35
WTUN Activity and our Impact
12:15
Parallel session 2: How does the HE landscape look across the world? A geographical and social perspective
© World Technology Universities Network 2022