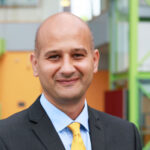 Professor Zahir Irani studied Manufacturing Engineering at the University of Salford before working as a Project Engineer in industry. He then secured a full scholarship from Brunel University London, where he completed a PhD in Investment Decision Making. His professional development has seen him complete his leadership and financial management training at Harvard Business School (HBS) and University of Cambridge, respectively. He started his academic career in the Department of Computer Science at Brunel University London. Five years later becoming the youngest Professor in the UK, followed by a period as Head of Department, where he championed industry-academia partnerships.

A move to a more senior management position, saw him lead the Brunel Business School. After completing a 7-year tenure as Head of the Brunel Business School, where he won the prestigious Times Higher Education (THE) Business School of the Year award. He accepted an invitation to work in Central Government, where he was seconded to Whitehall as a Senior Policy Advisor in the Cabinet Office during the UK coalition Government. On completion, he returned to academia, as Founding Dean, of the newly established College of Business, Arts and Social Sciences at Brunel University London; an amalgamation of four previous Schools – Business, Law, Social Sciences and Education.

In 2016 the University of Bradford appointed Professor Irani as Dean of Faculty (Management and Law), where he led a successful merger with the Faculty of Social Sciences before assuming the role of a Founding Dean of the new Faculty.

As a senior academic leader, Professor Irani expanded his portfolio when appointed Deputy Vice-Chancellor at the University of Bradford, with responsibility for Academic, Innovation and Quality, where he is accountable for:
• Four academic faculty’s.
• Directorate of Outreach, Recruitment and Marketing (DORM)
• Directorate of Student & Academic Services (including registry, library, career services, counselling, etc),
• Directorate of Learning, Teaching and Quality Enhancement, and,

Professor Irani also leads the transformation and growth of the University’s undergraduate, postgraduate (taught and research) educational portfolio through Faculty and Professional services, where he leads on innovation and enhancing the quality of the student experience, teaching practice, curriculum development and support for student learning and success.

The West Yorkshire Lord Lieutenancy formally recognized Professor Irani for his outstanding service to the community. He continues to support charities such as Age UK (Bradford and District) and the Volunteering Interfaith Partnerships (VIP) that help vulnerable communities.
He has also received the district governor’s award from Rotary International for services to the community.

He is also leading social, economic and cultural value creation, having been appointed by the Bradford Metropolitan District Council as the Chair of the Bradford Covid-19 Economic Recovery Board that developed a 5-year economic recovery plan for the district; approved in 2021 by the council executive and elected officials. At a national level, appointed by the NHS (Health Education England), to Chair a Blended Learning Advisory Group that will revision the future of medical and health clinical placements. He is also a Higher Education representative on a Cyber Security Steering Group for the Department of Digital, Culture, Media and Sport.

Professor Irani was named by the Sunday Times as a leading Bradford influencer. He tweets at: @ZahirIrani1

15:15
Future Trends in Global Higher Education: The impact of the internet of things, artificial intelligence and virtual campus on campus based universities
10:00
Civically Engaged Institutions in a Global Landscape
© World Technology Universities Network 2022