Chair of Council and Pro-Chancellor
University of Bradford 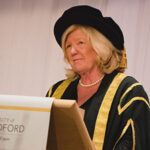 Ann Taylor was appointed Chair of Council and Pro-Chancellor at the University of Bradford with effect from 1 August 2015.

She is one of The Labour Party’s most experienced politicians, beginning her political career as MP for Bolton West in 1974, serving more recently as MP for Dewsbury.