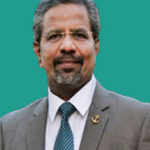 Dr. Jesudasan held notable positions at the National and International levels. He has to his credited 180 publications, in Journals/Conference Proceedings of high repute; one book;, one German Patent; guided 10 Ph.D. Scholars and handled both National and International funded research projects; offered Consultancy services; recipient of several accolades and awards; and Fellow/Member of several academic bodies and visited more than 20 Countries for academic engagement. He has served/serving as the Chairman/Member Coordinator of NAAC peer team assessed/assessing 35 Colleges all over India.