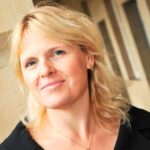 Kersten took up post as Chief Executive of Bradford Council in August 2015. Bradford has one of the youngest populations of any City in the UK and an ethnically diverse and entrepreneurial population. The District is enjoying a period of economic growth; growth of indigenous companies and inward investment, major capital schemes and opening of the regions 3rd largest retail centre. Her key challenges are to ensure that growth in the Bradford economy is sustained and that there is a significant uplift in levels of educational attainment within the District.

This takes place against a backdrop of dramatic reductions in central government funding for local government, devolution to City Regions and huge pressures in the delivery of social care and health.

Prior to taking up post in Bradford, Kersten was Chief Executive of York for six years. In this time the city, recovering after recession, experienced strong growth, with ‘functional full employment’ and high levels of business start up. Key highlights of the six years included the introduction of the living wage by many employers in the city, development of the first ‘gigabit city infrastructure’, designation of the city as a UNESCO ‘City of Media Arts’ and hosting of a stage start of the Grand Depart of the Tour de France in 2014.

Kersten is the lead Chief Executive for innovation and growth in the Leeds City Region, a trustee of Nesta (the National Endowment for Science, Technology and the Arts), a member of the Council of the University of Bradford and of the National Media Museum’s Advisory Board.