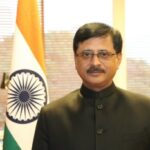 Born on July 28, 1965, Amb. Sanjay Kumar Verma graduated from Patna University and then pursued a Post-Graduate degree in Physics at Indian Institute of Technology (IIT), Delhi.

Amb. Sanjay Kumar Verma is an officer of the 1988 batch of Indian Foreign Service (IFS). He was stationed at the Consulate General of India, Hong Kong and at the Embassy of India in China, Vietnam and Turkey, before serving as the Consul General of India in Milan, Italy. Amb. Verma was also the Indian Ambassador to the Republic of Sudan. Following his tenure in Sudan, Amb. Verma served as Joint Secretary (Global Estate Management) in MEA, New Delhi. Prior to his arrival in Japan as the Ambassador of India, Amb. Verma was posted in MEA, New Delhi as Additional Secretary (Administration) and was also in charge of the Cyber Diplomacy Division.

He reads, writes and speaks Hindi, English and Chinese (Mandarin). He has conversational skills in Bengali as well.

Amb. Verma is married with a son and a daughter.