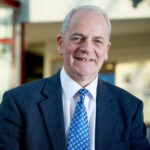 Brian Cantor is Professor of Materials at Oxford and Brunel Universities. He is also Founding Chair of the World Technology Universities Network, a Trustee of the Science Museums Group and an Editor of Elsevier’s premier review journal, Progress in Materials Science. He has published over 300 books and papers. He invented the field of High Entropy Alloys and discovered “Cantor alloys”. In the recent past, he has been Vice-Chancellor of the Universities of Bradford and York, Head of Mathematical and Physical Sciences at Oxford, a research scientist at GE Labs in the USA, a consultant for Alcan, NASA and Rolls-Royce, and a Vice-President of the Royal Academy of Engineering. He has worked at other universities such as Sussex, Northeastern, Banaras, Washington State and IISc Bangalore, and chaired or been on boards such as the Marshall Aid Commission, the UK Universities Pensions Forum, and Bradford, Leeds and York Local Economic Partnerships (LEPs). He founded and built up the Begbroke Science Park, the Heslington East Campus, the Hull-York Medical School, the National Science Learning Centre, and the World Technology Universities Network. He has received academic prizes, honorary professorships and fellowships in the UK, USA, China and India. He was awarded a CBE for services to higher education in 2013.