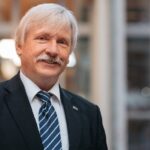 Peter Scharff is the former president of TU Ilmenau, Germany since 2004 and is currently a Professor of Chemistry. Before he was the Director of Physical Institute and Head of the Department of Chemistry. Peter received his Ph.D. in Inorganic Chemistry from the Technical University Clausthal, Germany and his Habilitation (venia legendi) in Inorganic Chemistry from the same institution. Before joining the TU Ilmenau in 1998, he served as a Visiting Professor at Nicolas Copernicus University, Torun, Poland. His research interests consist of preparative carbon chemistry and electrochemistry. He has published nearly 300 papers in international journals. He is member of head of German Exchange Service (DAAD) and fellow of the Academy of Useful Sciences in Erfurt. Peter was awarded several Dres h.c., as well as several Prof. h.c. He was awarded honorary member of senate of TU Ilmenau in 2021.

Prof Scharff is the current Chair of the World Technology Network and took on the position in August 2020 for a three year term.